Cœlebs in Search of a Wife

Coelebs in Search of a Wife: Comprehending Observations on Domestic Habits and Manners, Religion and Morals (1809) is a novel by the British Christian moralist Hannah More (1745-1833).
The novel focuses on Charles, a well-to-do young man who tries to find a wife who can meet the lofty moral requirements laid down by his mother. The book was extremely popular when it was published. Its novelistic narrative combined with religious lessons helped it to become the first nineteenth century novel to be accepted enthusiastically by the large religious reading public. Wikipedia

Cœlebs is, frankly, unreadable. It’s nearly 900 pages of turgid moralising with no discernible plot, no sympathetic characters and – fatally – no humour.

To add insult to injury, my edition retains the long S which is ſo not eaſy to read at ſpeed.

So why bother with it at all?

END_OF_DOCUMENT_TOKEN_TO_BE_REPLACED

Lord Peter Wimsey is on holiday in Kirkcudbright in South West Scotland, and on good terms with the artistic and local community there. When Campbell, a unpopular & quarrelsome landscape painter, is found dead in a burn near Newton Stewart (the Water of Borgan) it seems he must have accidentally slipped whilst painting near to the edge of a ravine.  But Wimsey is convinced the death wasn’t accidental and indeed an autopsy reveals that Campbell was dead before he fell into the burn.  There are six possible suspects, each with an alibi of sorts and all of whom had quarrelled with or been assaulted by Campbell, all of them artists.  The five innocent suspects are, of course, the five red herrings.

What follows is an intricately plotted story as Wimsey and the police investigate the mystery, culminating in Wimsey’s re-enactment of the crime from beginning to end to show how it was carried out.

This review is based on a talk I gave in November 2020 as part of an evening on the Geography of Literature.

The birth of Lord Peter Wimsey

In 1923, Dorothy Sayers launched into the world my first love, her aristocratic amateur detective–Lord Peter Wimsey.  With straw-coloured hair, a beaked nose, and a vaguely foolish face, Wimsey’s a casual detective, helped enormously by his loyal valet Bunter, and a very healthy private income.  Sayers has this lovely account of how she used Wimsey to live vicariously. END_OF_DOCUMENT_TOKEN_TO_BE_REPLACED

“The Golden Age” and “Dream Days” are Kenneth Grahame’s affectionate reminiscences of his idyllic childhood in 1860s Berkshire, including the classic story “The Reluctant Dragon”. The stories are both entertaining (as you’d expect from the author of “The Wind in the Willows”) and grimly tolerant of the unthinking adults who have no conception of the importance of catapults, ferrets and mud.

Mr Toad (“Parp, parp!”), Ratty (“There is nothing – absolutely nothing – half so much worth doing as simply messing about in boats,”), Mole and Badger – most of us have come across Kenneth Grahame’s 1908 childrens classic The Wind in the Willows. The strands of the book are based on stories Grahame told his young son, Alastair – who was, apparently, the model for Toad.  But before Alastair, before Grahame was even married, he wrote these enchanting memoirs of childhood – The Golden Age (1895) and Dream Days (1898). END_OF_DOCUMENT_TOKEN_TO_BE_REPLACED

The House with the Green Shutters 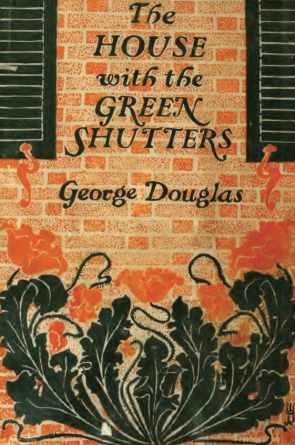 The brutish John Gourlay is a merchant in the village of Barbie, envied and resented by the villagers because of his success, which is symbolized in his prestigious house with green shutters. He dominates and bullies his family, in particular his sensitive, gifted but weak son. Ultimately, his refusal to acknowledge the arrival of the railway and to adapt to the increasing industrialization of Ayrshire precipitates murder, suicide, and his family’s tragic downfall.

Almost forgotten now, George Douglas Brown was the illegitimate son of an Ayrshire farmer. He nevertheless earned himself a place at Glasgow University and then won a scholarship to study at Balliol College, Oxford. He died at just 33. His writing has always been contrasted with J.M. Barrie’s more upbeat Scottish stories, but possibly a more relevant comparison is to another contemporary, Thomas Hardy. END_OF_DOCUMENT_TOKEN_TO_BE_REPLACED

Set against the backdrop of the late 17th and early 18th centuries, Quicksilver tells the intertwining tales of three main characters as they traverse a landscape populated by mad alchemists, Barbary pirates, and bawdy courtiers, as well as historical figures including Ben Franklin, William of Orange, Louis XIV, and many others.  The story ranges from the American colonies to the Tower of London to the glittering palace at Versailles, –and plays out during a singular nexus point in history, when rationality triumphed over mysticism, monarchy was overthrown, markets become free, and religious tolerance gained ground over harsh oppression.

There’s a lovely bit in Great Expectations, where Pip and Herbert go backstage to congratulate an acquaintance after his performance as Hamlet.

END_OF_DOCUMENT_TOKEN_TO_BE_REPLACED

Cricket, sailing, falling in love.  A house party of cheerful Bright Young Things bubbles its way through a delightful set of short episodes.

Yes, The Holiday Round was written by the man who wrote the Winnie-the-Pooh books.  Except this isn’t Pooh (though I like Pooh, especially read by Alan Bennett, who just gets Eeyore).

It’s Milne for grown-ups. Written for Punch in the early 1920s, these short stories are a long delightful burble of humour, usually involving the same small group of friends – playing cricket, bathing, sailing – and the long-vanished world of house parties. They are gossamer-light, and, I think, very funny. END_OF_DOCUMENT_TOKEN_TO_BE_REPLACED

Leave it to Psmith

Ronald Psmith (“the ‘p’ is silent, as in pshrimp”) is always willing to help a damsel in distress. So when he sees Eve Halliday without an umbrella during a downpour, he nobly offers her an umbrella, even though it’s one he picks out of the Drone Club’s umbrella rack. Psmith is so besotted with Eve that, when Lord Emsworth, her new boss, mistakes him for Ralston McTodd, a poet, Psmith pretends to be him so he can make his way to Blandings Castle and woo her. And so the farce begins: criminals disguised as poets with a plan to steal a priceless diamond necklace, a secretary who throws flower pots through windows, and a nighttime heist that ends in gunplay.

Everyone can remember where they were when they read their first Wodehouse – it’s up there along with your first kiss, where you were when you heard John Lennon was dead or the first time you spelled “occurred” without checking it out. I was twelve, in bed with flu, and my father brought me a bottle of Lucozade, and a couple of books he’d found in a jumble sale – Georgette Heyer’s “Black Sheep” and “Leave It to Psmith”.

I’d never before come across a book where the words weren’t used as simple building blocks: all the books I’d read till then marched briskly from A to B, no loitering, no funny stuff in the back row. “The Mountain of Adventure” would have had no truck with an opening sentence like:- END_OF_DOCUMENT_TOKEN_TO_BE_REPLACED

Like Scheherazade of “The One Thousand and One Arabian Nights”, Kai Lung relies upon his prowess as a storyteller to save his neck when he’s accused of treason. His traditional tales ― laced with thought-provoking aphorisms ― will transport readers to a mandarin’s court in ancient China.

How is it possible to suspend topaz in one cup of the balance and weigh it against amethyst in the other; or who…can compare the tranquillising grace of a maiden with the invigorating pleasure of witnessing a well-contested rat-fight?

Forget the frenetic world of Facebook, the torrent of trivia that is Twitter. This review brings you something different. This review wants you to Relax. This review invites you to kick back, turn off the phone, and enjoy the journey in the company of Ernest Bramah’s wonderful Oriental creation – Kai Lung, itinerant story teller, master of Litotes, Euphemism and Understatement, and Apologist Extraordinary for Slow Reading. END_OF_DOCUMENT_TOKEN_TO_BE_REPLACED