Home » Books » Leave it to Psmith

Leave it to Psmith 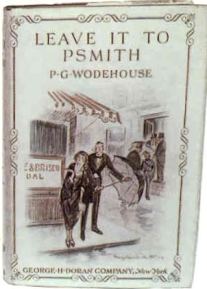 Ronald Psmith (“the ‘p’ is silent, as in pshrimp”) is always willing to help a damsel in distress. So when he sees Eve Halliday without an umbrella during a downpour, he nobly offers her an umbrella, even though it’s one he picks out of the Drone Club’s umbrella rack. Psmith is so besotted with Eve that, when Lord Emsworth, her new boss, mistakes him for Ralston McTodd, a poet, Psmith pretends to be him so he can make his way to Blandings Castle and woo her. And so the farce begins: criminals disguised as poets with a plan to steal a priceless diamond necklace, a secretary who throws flower pots through windows, and a nighttime heist that ends in gunplay.

Everyone can remember where they were when they read their first Wodehouse – it’s up there along with your first kiss, where you were when you heard John Lennon was dead or the first time you spelled “occurred” without checking it out. I was twelve, in bed with flu, and my father brought me a bottle of Lucozade, and a couple of books he’d found in a jumble sale – Georgette Heyer’s “Black Sheep” and “Leave It to Psmith”.

I’d never before come across a book where the words weren’t used as simple building blocks: all the books I’d read till then marched briskly from A to B, no loitering, no funny stuff in the back row. “The Mountain of Adventure” would have had no truck with an opening sentence like:-

At the open window of the great library of Blandings Castle, drooping like a wet sock, as was his habit when he had nothing to prop his spine against, the Earl of Emsworth, that amiable and boneheaded peer, stood gazing out over his domain.

Suddenly, sentences (quite ordinary looking sentences) turned out to have little quirks in the tail:

Beach the butler entered, a dignified procession of one.
or
[Lord Emsworth’s] mind had never been designed for the purpose of dwelling closely on problems for any length of time.

And pstrolling his loquacious way benignly through the sentences, Psmith (“The p, I should add, is silent, as in phthisis, psychic, and ptarmigan.”), a very tall, very thin, very solemn young man, leaves mayhem in his conversational wake. For instance, he “borrows” an umbrella to give to a girl caught in the rain:

‘If you insist, you may [return the umbrella] to the Hon. Hugo Walderwick, Drones Club, Dover Street. But it really isn’t necessary.’
‘I won’t forget. And thank you very much, Mr Walderwick.’
‘Why do you call me that?’
‘Well, you said . . .’
‘Ah, I see. A slight confusion of ideas. No, I am not Mr Walderwick. And between ourselves I should hate to be. His is a very C3 intelligence. Comrade Walderwick is merely the man to whom the umbrella belongs…[I believe in] practical Socialism. Other people are content to talk about the Redistribution of Property. I go out and do it.’

He’s an Etonian Marxist, down on his luck, when he looks for a job at Miss Clarkson’s Agency:

‘I am compelled to state specifically that no employment can be considered which has anything to do with fish. I am convinced that you will shortly have something particularly good to offer me.’
‘I don’t know that I can say that, Mr Psmith.’
‘The p is silent, as in pshrimp,’ he reminded her. ‘Oh, by the way,’ he said, pausing at the door, ‘there is one other thing before I go. While I was waiting for you to be disengaged, I chanced on an instalment of a serial story in The Girl’s Pet for January, 1919. My search for the remaining issues proved fruitless. The title was “Her Honour at Stake”, by Jane Emmeline Moss. You don’t happen to know how it all came out in the end, do you? Did Lord Eustace ever learn that, when he found Clarice in Sir Jasper’s rooms at midnight, she had only gone there to recover some compromising letters for a girl friend? You don’t know? I feared as much. Well, good morning, Miss Clarkson, good morning. I leave my future in your hands with a light heart.’
‘I will do my best for you, of course.’
‘And what,’ said Psmith cordially, ‘could be better than Miss Clarkson’s best?’

The plot thereafter (the diamonds, the gangsters, the star-crossed lovers) – well, Wodehouse is in a class of his own. Like a czardas, the plot strands start very simply and gradually become more and more frenetic, but – and this is the bit that makes Wodehouse just brilliant – at any given point, it seems completely logical that Psmith should pretend to be a Canadian poet simply to be polite –

‘You remember that passage in my Songs of Squalor which begins “Across the pale parabola of Joy . . . ”?’

Or that Lord Emsworth’s secretary, Baxter, should end up throwing geranium pots against the castle wall at dawn.

‘If I were you,’ said Psmith, ‘and I offer the suggestion in the most cordial spirit of goodwill, I would use every effort to prevent this passion for flinging flower-pots from growing upon me. I know you will say that you can take it or leave it alone; that just one more pot won’t hurt you; but can you stop at one? Isn’t it just that first insidious flower-pot that does all the mischief? Be a man, Comrade Baxter!’

I go back to Psmith when I’m feeling a little down. I chuckle again at his proposal to Eve…

‘By the way,…I forgot to mention, when asking you to marry me, that I can…also recite “Gunga-Din”. Will you think that over?’
‘I will.’
‘Thank you,’ said Psmith. ‘Thank you. I have a feeling that it may just turn the scale.’

…and I feel that everything is, once more, right with the world.